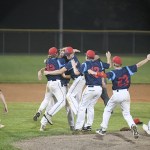 The Albert Lea baseball team entered Wednesday night with a shot at school history. A feat which hadn’t been accomplished by an Albert Lea team since 1969 — a trip to the Minnesota state tournament.  Standing between the Tigers and that goal was the Byron Bears. Having split their previous two games this season, the […]