Home News Sharing her cancer story to give life to others 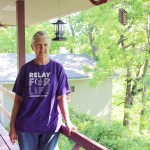 Honorary survivor has battled multiple cancers By Sarah Stultz [email protected] Rosemary Bloomquist was 48 years old when she was first diagnosed with cancer. At that time, in 1997, she had just changed doctors, and her new doctor found a lump in her right breast during a routine physical. After having a mastectomy of that breast […]

The post Sharing her cancer story to give life to others appeared first on Albert Lea Tribune.