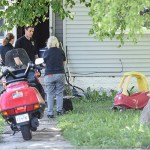 One man is dead Saturday following an early morning shooting in Austin.