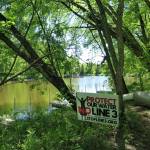 Organizers say more than 1,500 hundred people from around the country are expected in northern Minnesota this weekend for what they’re calling the “largest resistance yet” to the ongoing construction of the Line 3 oil pipeline project.