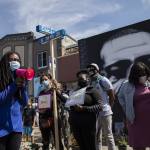 MINNEAPOLIS — Crews on Thursday removed the concrete barriers that blocked traffic at a Minneapolis intersection where a memorial to George Floyd was assembled after his death last year, but community activists quickly put up makeshift barriers and resumed chanting the name of the Black man whose killing galvanized the racial justice movement. It took […]