Home News When will the horse barn be replaced? 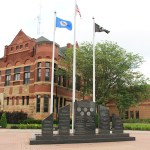 One of the superintendents for the Freeborn County Fair’s Horse Department questioned the county Board of Commissioners Tuesday about whether the horse barn would be reconstructed for this year’s fair.  Gary Richter, who has been a superintendent with his wife, Stephanie, since 2009 and who is also involved with the Sunset Saddle Club, said the […]

The post When will the horse barn be replaced? appeared first on Albert Lea Tribune.