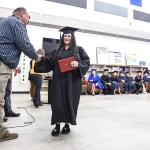 Graduation is a milestone most don’t forget, marking simultaneously both an ending and a beginning. On Friday, the Southern Minnesota Education Consortium held its fifth commencement of its Alternative Learning Center seniors. Thirteen seniors received diplomas from districts that this year include Lyle, LeRoy-Ostrander, Grand Meadow and Albert Lea. While it’s a memorable occasion, for […]