Home News ‘I let down my feathered friends’ 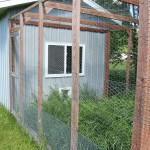 Until this year, he has never had any problems raising his birds, but on Sunday, he said, someone came onto his property and stole 20 of the pheasants and left two dead —stepped on “as flat as a pancake.”

The post ‘I let down my feathered friends’ appeared first on Albert Lea Tribune.