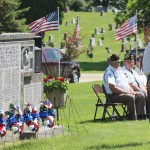 As in years past, Albert Lea and the surrounding communities will observe Memorial Day with special programs in area cemeteries, including a larger program to honor deceased military veterans. Albert Lea American Legion Cmdr. Jeff Olson said the Legion Honor Guard will start the day with a ceremony at Lakewood Cemetery at 8 a.m., followed […]