Home News An expansion in Graceland’s Avenue of flags 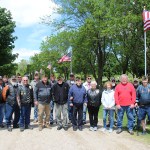 Visitors coming to Graceland Cemetery this Memorial Day will see an expanded Avenue of Flags thanks to a special project to bring flags to the road near the gravesite of Corey Goodnature.

The post An expansion in Graceland’s Avenue of flags appeared first on Albert Lea Tribune.