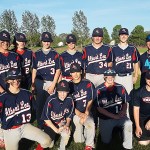 The Albert Lea boys’ C-squad baseball team finished their season May 25 with a record of 8-7.