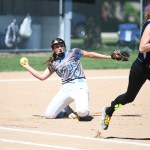 In what would turn out to be its final game of the regular season, the Alden-Conger/Glenville-Emmons softball team hosted Schaeffer Academy Wednesday night in the “Lace up for Pediatric Cancer game.” The Wolverines wasted no time proving they came out to play jumping out to an 8-1 lead in the first inning, eventually coming away […]