Home News Vaccination pace back above 40,000 shots a day 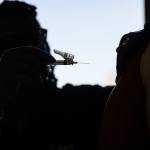 Minnesota’s COVID-19 vaccination pace climbed back above 40,000 shots a day over the weekend, a level not previously seen for more than two weeks. That’s still far from the peak seen in mid-April, when the seven-day rolling average exceeded 60,000 doses a day. But it’s a notable increase from earlier this month, when that average […]

The post Vaccination pace back above 40,000 shots a day appeared first on Albert Lea Tribune.