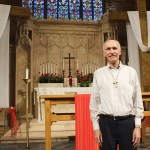 A longtime Albert Lea faith leader is retiring on Sunday after giving his final sermon at First Lutheran Church. The Rev. John Holt started with the church in September 2002, and before that he served at Our Savior’s Evangelical Lutheran Church in Jackson for over 14 years and at a church in Dwight, North Dakota, […]