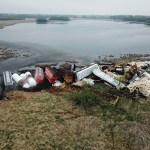 The Union Pacific train line that was down because of a derailment was back up and running again Wednesday afternoon, Freeborn County’s emergency manager said. Crews worked around the clock since the derailment Saturday to clear the rail of debris and damaged cars. Ongoing monitoring of pH levels in Goose Lake and the area near […]