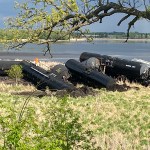 Authorities are at the scene of a Union Pacific Railroad train derailment behind Eastgate Road near Goose Lake in Albert Lea. According to the Freeborn County Sheriff’s Office, about 20 cars derailed on the southbound train. No information has been released on what led to the derailment. The derailment was reported to authorities at about […]