Home News A fresh start for an old fav 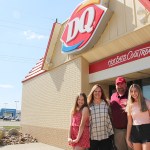 The new owners of Albert Lea’s Dairy Queen on North Bridge Avenue said they were looking for a business opportunity when they were approached with the idea of taking over the restaurant last year.

The post A fresh start for an old fav appeared first on Albert Lea Tribune.