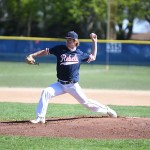 WELLS — The United South Central baseball team hosted Hayfield Tuesday night hoping to extend their winning streak to five games. It wasn’t meant to be for the Rebels as the undefeated Vikings came to town ready to play, eventually defeating the Rebels 15-2. It was a quick first inning as only one base runner […]