Home News ‘If it could help him in the long run, I was willing to do whatever’ 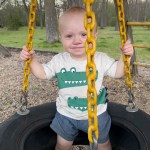 When Jacy Jaeger was pregnant with her now 1-year-old son, Kael, she and her husband found out their new baby had a cleft lip and palate.

The post ‘If it could help him in the long run, I was willing to do whatever’ appeared first on Albert Lea Tribune.