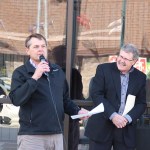 The street that runs next to the Marion Ross Performing Arts Center will now be known as Marion Ross Street. Albert Lea Mayor Vern Rasmussen Jr. and Albert Lea Convention and Visitors Bureau Executive Director Holly Karsjens unveiled the new street sign Thursday during a short ceremony outside the theater. The name change applies to […]