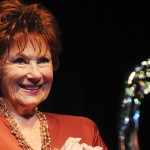 The public is invited to attend a street renaming ceremony Thursday afternoon on the north side of the Marion Ross Performing Arts Center. In anticipation of the new Marion Ross bronze statue being unveiled July 2, Water Street in the block next to the theater will be renamed as Marion Ross Street. Ross, who grew […]