Home News ‘Stand for what this country was founded upon’ 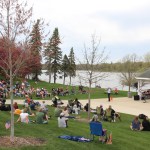 The owner of The Interchange Wine & Coffee Bistro, who opened her business in defiance of the governor’s executive orders, said Saturday she will continue her fight for liberty though it has been one that is hard and uncomfortable at times. Lisa Hanson encouraged a group of at least 100 people to stand up for […]

The post ‘Stand for what this country was founded upon’ appeared first on Albert Lea Tribune.