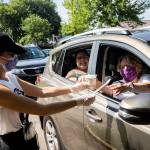 Minnesota officials continue to urge residents to stay vigilant against spreading COVID-19. But as May begins, the outlook is brightening for a relatively normal summer. Conditions have improved significantly since mid-April around new cases, active cases, hospitalizations and other metrics — enough so that Gov. Tim Walz in coming days is expected to loosen some […]