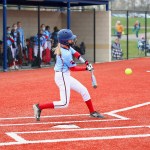 The Albert Lea softball team took on Austin Tuesday night for the second time this season. In a game that was cut short due to inclement weather, the Tigers showed up and earned their second victory over their Interstate 90 rivals 15-10. In their first game this season, the Tigers dominated the Packers 22-4, boosting […]