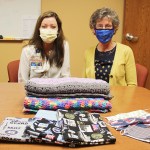 In 2011, area resident Renee Ruble lost her sister to cancer. Ruble said it was the third time for her sister to be diagnosed with cancer, and her sister lived about 18 months from the time of her diagnosis until her death. She received hospice services for about the last two weeks of her life.  […]