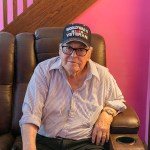 GLENVILLE — It has been 75 years since since Glenville veteran Tony Chavez was stationed overseas during World War II, but he remembers many of his experiences there clearly.