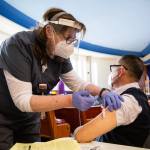 WASHINGTON — Half of all adults in the U.S. have received at least one COVID-19 shot, the government announced Sunday, marking another milestone in the nation’s largest-ever vaccination campaign but leaving more work to do to convince skeptical Americans to roll up their sleeves. Almost 130 million people 18 or older have received at least […]

The post Half of US adults have received at least one COVID-19 shot appeared first on Albert Lea Tribune.