Home News Recognition for years with the Legion 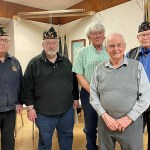 Ten members of the Albert Lea American Legion were recognized for 50 and 60 years with the Legion.

The post Recognition for years with the Legion appeared first on Albert Lea Tribune.