Home News Legionnaire of the Year: A helping hand whenever needed 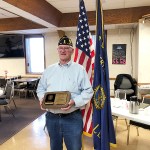 The Albert Lea American Legion’s Legionnaire of the Year is known as someone who gives back to honor veterans and their families. Albert Allen received the award, which is selected by the winners from the previous three years, during a ceremony Monday night at the Legion. “I’m still in awe,” Allen said during an interview […]

The post Legionnaire of the Year: A helping hand whenever needed appeared first on Albert Lea Tribune.