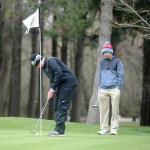 The Albert Lea boys’ golf team had its first match of the season Tuesday afternoon against the Austin Packers. Playing at Austin Country Club with the temps hovering around 35 degrees and the wind chill making it feel below 30, the Tigers came out with a positive mindset and ready to play, beating the Packers […]