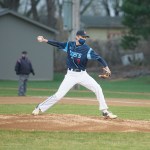 After a nearly two-year hiatus, high school baseball season was finally back in Minnesota, and Thursday night featured a prime Big Nine Conference matchup between Albert Lea and Austin.  After jumping out to an early lead, the Tigers were unable to hold onto their lead, eventually falling to the Packers in their season opener 3-1.  […]