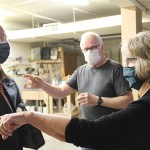 Hagedorn tours Marion Ross theater on eve of opening of grant relief program Representatives of Albert Lea Community Theatre and the city of Albert Lea stressed the value of the Marion Ross Performing Arts Center in the community Wednesday during a visit with 1st District U.S. House Rep. Jim Hagedorn.  Neil Lang, who manages the […]

The post ‘We know what it would mean if the city were to lose something like this’ appeared first on Albert Lea Tribune.