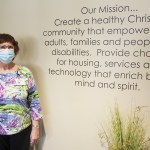 An Albert Lea woman is preparing to retire in May after spending 50 years as a nurse in the community. Linette Kleinschrodt said she graduated from Naeve Hospital School of Nursing in 1971 at the prompting of her father and has never looked back. After completing her training, she started first at the hospital for […]

The post Albert Lea woman prepares to retire after 50 years as a nurse appeared first on Albert Lea Tribune.