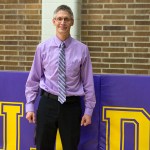 Lake Mills Athletic Director Jim Boehmer has been widely regarded by his colleagues as one of the best athletic directors in North Iowa for much of the past two decades.
His work was finally recognized at the state level.