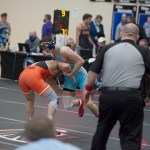 ST. MICHAEL — Two Albert Lea wrestlers traveled to St. Michael-Albertville High School Thursday afternoon to participate in the Class AAA Minnesota State Tournament.  Senior Caleb Talamantes and junior Cameron Davis earned a spot in their respective weight classes by qualifying in the prelim tournament last Saturday.  While neither came away from the tournament with […]