Home News COVID-19 update: More than a quarter of Minnesotans have at least one vaccine dose 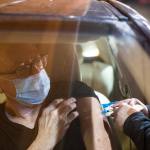 More than a quarter of Minnesota residents have received at least one dose of a COVID-19 vaccine, state health officials announced Sunday. That’s more than 1.4 million people. More than 15 percent of state residents have completed their vaccinations, whether that’s the two-dose Moderna and Pfizer vaccines, or the one-shot Johnson & Johnson vaccine. Those […]

The post COVID-19 update: More than a quarter of Minnesotans have at least one vaccine dose appeared first on Albert Lea Tribune.