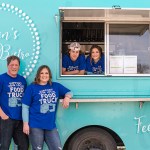 Almost two years ago when city officials announced they would allow food trucks to set up at various locations throughout the city, Erin McCormick-Lee knew right away that’s what she wanted to do.