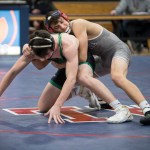 Six Albert Lea wrestlers entered the Section 1AAA-2AAA state prelim tournament Saturday in Farmington with the chance to advance to the state tournament next week.  By the end of the day two of them punched their ticket to compete for a state championship in their respective weight classes.  Eighth graders Nick Korman and Logan Davis, […]