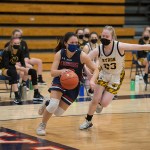 What started out as a slow-moving game in the first half, quickly turned into a barn burner, as the Albert Lea girls’ basketball team hosted Byron in the first round of the Section 1AAA playoffs. The No. 5-seeded Bears kept themselves in the game with a late game-tying three-pointer, but the No. 4 seed Tigers […]