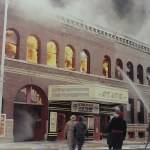 More than 62 years after the movie theater in Wells was destroyed by fire, the theater that received its namesake from the fire has plans this weekend to bring back the classic movie that played that day.