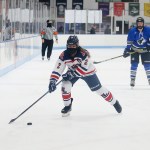 After a tough loss to Big Nine rival Owatonna Wednesday night, the Albert Lea girls’ hockey team was right back at it Thursday night on the road against Mankato West.  Despite a late comeback attempt by the Scarlets, the Tigers held on to end their regular season with a win, 3-2. The first period was […]