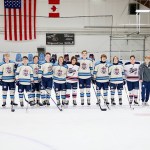 After losing to Mankato West by one goal early on in the season, the Albert Lea boys’ hockey team had a chance at redemption Thursday night when they hosted the Scarlets for their second matchup of the season series. Not only did the Tigers avenge their earlier loss, they upped their season record to .500 […]