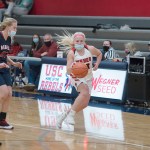 NRHEG and United South Central battled it out Friday night with the Panthers coming out on top 67-41.