Home News $3/gal national average could be on the horizon 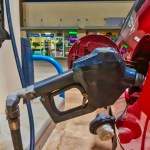 If you’re not liking the rise in gas prices at the pump — then hold on to your gas cap. In a press release from GasBuddy on Thursday, motorists should brace for the national average breaching $3 per gallon by Memorial Day after OPEC’s meeting on Thursday closed with no meaningful increase in oil production. […]

The post $3/gal national average could be on the horizon appeared first on Albert Lea Tribune.