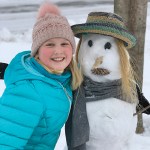 Residents from all over the area got out to enjoy the snow after the weekend snowstorm in mid-January. Many built snowmen and other snow creations.