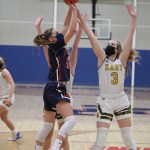 Albert Lea junior Taya Jeffrey not only led the Tigers with 18 points in the victory over the Falcons Monday night, she also etched her name in the school’s history books, becoming one of the select players in program history to reach the 1,000-point milestone.  Entering the game against Faribault, Jeffrey needed just seven more […]