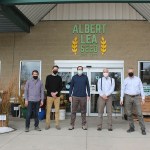 Albert Lea Seed, a farm seed and garden center in Albert Lea, has established a stock-ownership structure to transition business ownership to its employees. Since its foundation by Louis Ehrhardt in 1923, the company has been owned and operated by the Ehrhardts for three generations. Current co-owners Mac, Tom and Margaret Ehrhardt took over operational […]