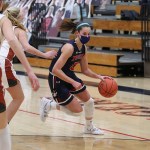 The Albert Lea girls’ basketball team hosted Winona Friday night in an effort to win their second game of the season.  The Tigers got big performances from many players, including a huge 24-point game from junior Taya Jeffrey, to dominate the Winhawks, 62-33.  Albert Lea held a 12-point advantage at halftime before really turning on […]