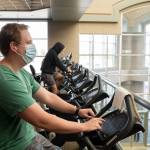 Democrats in the Minnesota House are considering making a mask mandate state law while Republicans in the Senate continue their efforts to limit DFL Gov. Tim Walz’s emergency powers.