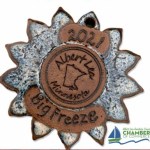 The Albert Lea-Freeborn County Chamber of Commerce announced Thursday morning the Big Freeze medallion has been found. Trae Swehla found the medallion Wednesday night. The hunt began on Monday as part of the annual winter festival.